Help
A place where a man can slow down to a walk and live his life full measure, but he has to keep his watch on Pacific Time.
About the Toaster

Baseball Toaster was unplugged on February 4, 2009.

Frozen Toast
Catfish Stew
And So To Fade Away
Fairpole
Baseball Toaster To Be Unplugged, Disassembled For Scraps
Cub Town
Fade to Black
Humbug
My Final Take-It-Or-Leave-It Offer
The Juice
Official Moving Day is Here
Cardboard Gods
Reggie Jackson, 1976
The Griddle
You did a good job, but it's time to go
Dodger Thoughts
Cheers
Bad Altitude
Pitcher News; I Dump My Tickets
Mike's Baseball Rants
The State of the Hall 2009
Bronx Banter
Movin' On
Just a Bit Outside
And We're Off!
Toaster.TV blogs
Western Homes
Screen Jam
Tin Ear
Aesthetics
Search
Archives

The stuff I keep track of
Random Game Callbacks

Personal favorites that I wrote
FAQs

At least I think they should be.

Vote No on B? Why? Looking back 50 years
by Bob Timmermann

On Thursday, April 3 from 12:15-1 pm, I'll be giving a talk at the Los Angeles Central Library about the political battle of bringing the Dodgers to L.A. I won't be able to reproduce my entire presentation here for a variety of reasons, namely that there are a lot of photos I'm using that I can't guarantee I have copyright clearance for. But there is plenty of stuff in the public domain and I thought people might find it interesting to read a piece of campaign literature opposing Proposition B.

Proposition B was a referendum put on the June 3, 1958 ballot for voters in Los Angeles to approve or disapprove the deal the previous October when the Los Angeles City Council voted to let Dodgers owner Walter O'Malley trade his property at Wrigley Field for about 300 acres at Chavez Ravine as well as financial considerations to help build roads to the new park. O'Malley was also supposed to build a recreation center near the area.

You can read the piece and then decide for yourself if the arguments from 50 years ago still hold water today. There are numerous references to "Read the contract," but I don't have a copy of it. Actually I have a copy of the contract, but it's really long and came on a big piece of paper.

PROPOSITION "B" IS NOT A VOTE FOR OR AGAINST BASEBALL

PROPOSITION "B" IS A VOTE ON A CONTRACT THAT IS UNFAIR TO THE CITY AND YOU AS TAXPAYERS.

WE URGE YOU TO READ THE CONTRACT. A copy is enclosed.

PROPOSITION "B" WILL COST TAXPAYERS MILLIONS!

THE DODGERS ARE IN THE COLISEUM FOR TWO YEARS. THERE IS AMPLE TIME TO NEGOTIATE A NEW CONTRACT, FAIR TO THE CITY, THE TAX PAYERS, AND THE BALL CLUB.

The following Council members are all in favor of a major league baseball in Los Angeles, but ALL recommend a NO vote on "B".

VOTE NO on "B" - Unless you want to GIVE MILLIONS OF YOUR TAX DOLLARS... and MILLIONS OF DOLLARS OF CITY OWNED LAND ... to a private commercial team for BARS, HOTELS, RESTAURANTS, AMUSEMENT PARK, APARTMENT HOUSES, STORES, SHOPPING CENTERS, -- as well as baseball.

All the above are possible under the contract listed on your ballot as Proposition "B." READ THE CONTRACT! A copy is enclosed.

READ THE CONTRACT! City must deed up to THREE HUNDRED FIFTEEN ACRES (equal to 63 city blocks) of DOWNTOWN LOS ANGELES to a New York Corporation or its "NOMINEE"!

READ THE CONTRACT! City is required to spend TWO MILLION OF YOUR TAX DOLLARS to "prepare" (level, pave, etc.) this land for the New York Corporation.

READ THE CONTRACT! (Paragraph 1-d) The property "will be conveyed free and clear of any deed restriction on use!" This means the 315 acres can be used for ANY purpose allowed by C-3 or other zoning. NOTE ESPECIALLY that the "public use only" restriction will no longer apply!

After millions of your tax dollars have been spent on 315 acres; all restrictions removed, and the property zoned C-3, real estate men say it will be worth TENS OF MILLIONS OF DOLLARS!

Why spend millions of your tax dollars and make a gift of this fabulously valuable land to a private, profit making Corporation?

(Important - See other side.)

What does the City receive for tens of millions of dollars of land and millions of tax dollars? READ THE CONTRACT!

NOT THE DODGERS. They are already here.

NOE ONE CENT OF RENT, GATE RECEIPTS, PARKING, ADVERTISING, PAY TV, FREE TV, OR RADIO RIGHTS INCOME! In San Francisco the City will receive an estimated $600,000 a year from just some of these! ANd the City, not the ball club will own the land.

NOT ONE WORD IN THE CONTRACT SAYS THE DODGERS MUST REMAIN IN LOS ANGELES! They can leave at any time and still keep all the land! In San Francisco the Giants ahve agreed in writing to remain 35 years!

NOT ONE WORD IN THE CONTRACT SAYS THE DODGERS SHALL BUILD A TWELVE MILLION DOLLAR STADIUM! (That is propaganda!) The Contract specifies only a modern stadium seating 50,000. Such a stadium could be built for half that figure.

IMPORTANT. The Dodgers do not have to invest a cent of their money to build a stadium. They could mortgage part of the land, leave at any time and keep all the surrounding acreage!

NOT ONE WORD IN THE CONTRACT SAYS WHEN THE STADIUM IS TO BE BUILT.

The City does get 10-acre WRIGLEY FIELD, assessed by the County Assessor at $362,000. This in trade for 315 acres of land worth TENS OF MILLIONS OF DOLLARS!

Ball Club says it will spend "NOT TO EXCEED" $500,000 on recreation facilities ... This wording is meaningless! The Ball Club could spend one cent and comply with this wording!

READ THE CONTRACT! The much publicized reaction area may never be built! Read "escape clause" in Paragraph C. Ball Club can violate any term of the Contract with reference to the recreation facilities and not affect its title to the rest of the property!

READ THE CONTRACT! Even if the recreation area is built, it is only TEMPORARY. In 20 years the land improvements are transferred to the Ball Club!

OIL! Why give away half our oil revenue? READ THE CONTRACT? (SEC. 1b)! What has oil to do with baseball?

DON'T BE FOOLED BY PROPAGANDA! READ THE CONTRACT! VOTE NO ON "B." 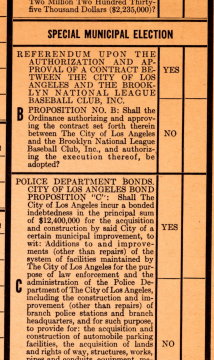 Comments
1.   Sam DC
I wouldn't have guessed the term "shopping centers" was already in common usage in 1958.

4.   Daniel Zappala
I can promise your attendance will increase by 5 if you hold it two weeks later when I'm in town.

5.   Lexinthedena
I'm there. I would love to interview you about this tpoic for the radio show I work on as we do a lot on the history of L.A.

Would they have become the Anaheim Dodgers? Because, if I'm not mistaken, the trollies in Anaheim were still running in the 50s, no? So that would have been kind of cool.

Then LA could have had the Angels.

7.   Bob Timmermann
6
Plan B would likely have been a renegotiation of the contract in some form that would have been more palatable to the people opposing the deal. Or a longterm lease. But O'Malley never really thought he would lose.

8.   Raf
0 Very cool, I wish I were able to see it. Will there be a webcast, podcast, or an online broadcast?

1 Not surprising, given that people were moving out to the suburbs by then.

An early shopping center in the United States was Country Club Plaza, which opened in 1924 in Kansas City, Missouri. Other important shopping centers built in the 1920s and early 1930s are the Highland Park Village in Dallas, Texas; River Oaks in Houston, Texas; and Park and Shop in Washington, DC.

However, the concept of the fully-enclosed shopping mall did not appear until the 1950s. The idea was pioneered by the Austrian-born architect and American immigrant Victor Gruen. This new generation, that were eventually called malls, included Northgate Mall, built in north Seattle, Washington, USA in 1950, Victor Gruen's Northland Shopping Center built near Detroit, Michigan, USA in 1954, and Gulfgate Mall in Houston were all originally open-air pedestrian shopping centers that later were enclosed as malls. The first enclosed, postwar shopping center (or mall) was the Gruen-designed Southdale Center, which opened in the Twin Cities suburb of Edina, Minnesota, USA in 1956. As equally important as the enclosed aspect of these new malls was that for the first time in the development of American cities, these malls moved retailing away from the dense, commercial downtown into the new sprawling and largely residential suburbs. This formula--enclosed space with stores attached, away from downtown, and accessible only by automobile--became a popular way to build retail across the world at different moments. In the UK, Chrisp Street Market was the first pedestrian shopping area built with a road at the shop fronts.

7 He had come too far to lose.

Definitely a fascinating point in history. Was it true that Chavez Ravine was underutilized/unwanted until O'Malley had designs on it?

9.   Bob Timmermann
8
It's hard to say if Chavez Ravine was underutilized. People were living there for a long time. It may not have been the fanciest neighborhood, but the people living there thought it was home.

But after the residents were moved out for a proposed public housing project that ended up being canceled, almost no one lived there.

So you had a lot of good real estate just north of Downtown L.A. Something had to go there.

10.   scareduck
6 - the PE Santa Ana line, one of two that extended to Orange County, never made it to Anaheim:

Service continued through 1958, so you do have that part right.

11.   Raf
6 ,7 Was Wrigley Field ever considered if Dodger Stadium had fallen through? I think O'Malley had the rights to it. Even though it was a temporary solution, was there a reason they couldn't stay in the Coliseum?

12.   scareduck
11 - the Coliseum was a terrible baseball venue. Seats not really constructed for baseball, the shortest left-field fence in the majors, and what would have certainly been numerous unanswered questions going forward about revenue splits would have made the Coliseum a mess.

The Dodgers were only supposed to play in the Coliseum for two years and they had to do some finagling to get two more years out of their lease from the Coliseum Commission. Remember in 1960, the Coliseum was used for the Dodgers, Rams, Chargers, USC, and UCLA.

As well as track meets. It was a busy place.

Comment status: comments have been closed. Baseball Toaster is now out of business.